The baby shower was a group effort. It was so awesome to be able to focus on cleaning my house the day of the party rather than cleaning, then cooking, then cleaning the kitchen again! Heather was in charge of food, but she is also the source of the idea to open parties with a craft while everyone gathers.

I picked up onesies, felt (it doesn’t fray), and double-sided fusing mesh (probably not what it is actually called – it was near the fabrics). I also printed out some really basic animal shapes people could copy or use as inspiration. Scissors and a couple of irons are the only other things you will need.

We also used the diapers left over from the diaper wreath to write funny or supportive messages to make late night diaper changes just a little less painful. 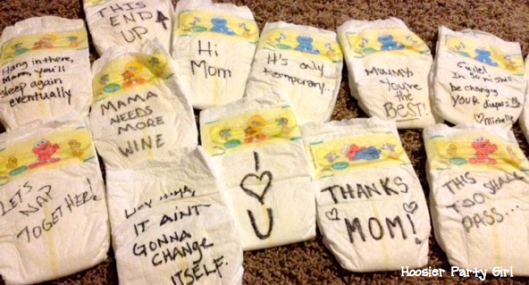 I love a good theme party!

I love a good theme party - that about says it all. This blog is pure fun. I will be posting about the theme parties around these parts and the different crafts I attempt to make it affordable. I will include holiday celebrations too, and I welcome guest posts. Let’s Party!